25 km of coastline, just one village, enough dream beaches to fall madly in love with it: that's the Greek island of Elafonissos in a nutshell.

Elafonissos is the perfect Greek island for those who think “in the small barrel there is good wine”. In just 19 square kilometers it condenses an ideal amount of dream beaches bathed by a sensational sea: enough not to get bored, not too many not to panic when it’s time to choose which one to see. Among these there is also one of the top 10 beaches of Greece.

Small in size, Elafonissos (or Elafonisos) covered in the past a strategic importance and over the centuries was inhabited by Greeks, Arabs, Venetians and English. Some Venetian reminiscences can still be seen.

Also called Deer, a curious name since here deer are not seen, should not be confused with the famous beach of Elafonissi in Crete. It is located south of Peloponnese, the jagged peninsula in southern Greece, at the same latitudes as the Cyclades; it was once also part of the Peloponnese, but was detached after an earthquake.

The stretch of sea which divides it from the mainland is short, but long is the distance from the airports and the international ports, reason for which Elafonissos has remained for a long time out of the classical tourist itineraries. Until a few years ago it was the refuge of campers and motorcyclists in search of less emblazoned destinations. Today the number of tourists has increased exponentially, but Elafonissos still has an authentic charm, beautiful but a bit ‘chaotic architecture and streets not served by public transport.

Forget the designer hotels of Santorini, the transgressive parties of Mykonos and the impeccable tourist services of the most famous islands. The tiny Elafonissos is loved for its crystal clear waters, sandy beaches and little else; there is no shortage of entertainment, but do not expect a wild nightlife: there is a good choice of bars to spend the evening, of clubs to dance until late there is only one.

It is an island for many but not for all, because it takes a bit of effort to get there, or because tastes are tastes. If you are looking for excess, glamor and social life on the one hand, absolute silence on the other, it is not for you. If you want a mix between peace, landscapes and services is the right place.

For the sea needless to say that you are in the right place: with a vacation in Greece is never wrong.

The beaches of Elafonissos are unquestionably the top attraction of the island, the real reason why tourists come here. Let’s see the most beautiful ones.

1Search for a hotel in Simos Beach 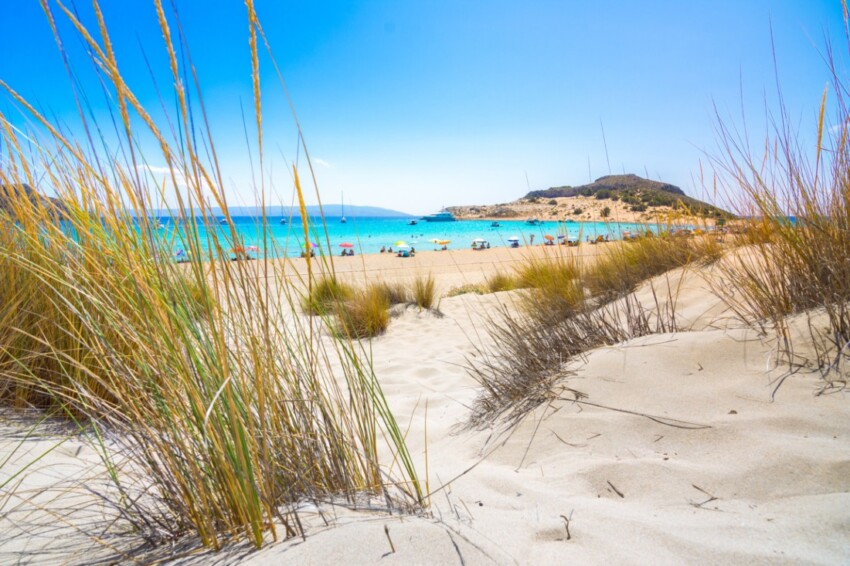 Simos is the queen of the beaches of Elafonissos: not only the most beautiful of the island, it is considered one of the most beautiful of all Greece and therefore is a must for anyone who comes on vacation here. Situated along the south-eastern coast, it is a sandy beach with a Caribbean atmosphere which occupies a large part of Saracenic bay.

Easy to reach, safe, equipped with essential services and above all beautiful, Simos is a beach loved in equal measure by couples, families with small children and lonely souls. In July and August it is very crowded, but being very large it is possible to find a quieter corner.

The beach is divided into two distinct areas by a thin isthmus of sand that leads to a small promontory: the smaller area is very popular because it is sheltered from wind and currents, the larger is ideal for those who do not like confusion, but you have to take into account the possibility of strong wind and waves. Generally both are indicated with the name of Simos, but in some guides you can find the name of Sarakiniko for the bigger one and Fragos for the smaller one.

If you are looking for an equipped beach go to the small area, where there are two bathing establishments; the big area is free and wild.

What does not change is their beauty: in both beaches the white sand is lapped by a crystal clear sea of a beautiful light blue color; complete this wonderful landscape sand dunes up to 10 meters high and cedar trees.

The beach of Simos can be reached with a short walk from the parking lot. From the beach instead you can walk to the top of the promontory, a perfect vantage point to admire both beaches at a glance.

Other beaches not to be missed in Elafonissos

The second most famous beach of Elafonissos is Panaghia Beach2, located on the opposite side of the island. It is also called Kato Nisi (island below) and it is a beach of golden sand; from the turquoise sea emerge here and there some rocky islets.

Kato Nisi is a good mix between the beauty of the landscape and comfort: it is easily reached by car and the parking lot is located just behind the beach, most of it is free, but it is possible to rent sunbeds and umbrellas in a small area.

The “city” beach of Elafonissos, is Kontogoni Beach3, located in the main village. It is an equipped beach behind which extends a long line of bars and restaurants, perfect for those who want to lie in the sun without pulling out the car and to enjoy a drink at sunset with a sea view.

Not far from Kontogoni is Kalogeras Beach4, where you will find a finer sand and much less confusion. An even less known beach is the tiny Lefki, a white cove not far from Simos.

If while waiting to embark for Elafonissos or before going back to the airport you don’t want to miss the opportunity of a dip, Pouda Beach5 is a possibility to be considered.

What to see in Elafonissos

Elafonissos is the classic beach vacation island, lacking in historical and cultural attractions of importance, but this does not mean that there is no lack of nice things to see.

The church of Agios Spyridon is one of the most photographed subjects of Elafonissos. It is the typical blue and white Greek church, made more impressive than other similar religious buildings because it is built on an uninhabited islet. The effect is that of a church suspended over the sea and framed by cedar trees. Built in the second half of the nineteenth century, it is dedicated to the patron saint of the island of Elafonissos.

You do not need a boat to visit Agios Spyridon: the islet on which it stands is connected to Elafonissos by a bridge, so it can be easily reached on foot.

Talking about treasures, and this time we are talking about historical reality not mythology, we cannot avoid to mention Pavlopetri, the submerged city that lies at the bottom of the waters around Elafonissos. It is an ancient city dating back to 3000 B.C., of which today remain about 15 buildings located at a depth of only 3-4 meters.

Unfortunately it is not possible to dive or get too close by boat because the area is subject to a strict control aimed at avoiding theft of archaeological finds.

Some local operators organize boat excursions that include the possibility of snorkeling above the findings: it is recommended, however, only to experienced swimmers because the boats must stay at a certain distance. Choose with care the excursion to which to participate; if you have doubts about safety better leave it alone.

An unmissable natural monument are the rocks of Vaporaky, whose shape vaguely resembles that of a boat.

A Greek legend says that it is a pirate ship that arrived on the island centuries ago; when the crew tried to attack a local church the ship was petrified in the same position in which we see it today.

Less suggestive is the scientific explanation: they are rocks smoothed by wind and sea erosion.

Nature and legend are also intertwined in the area of Karokofolia, a hill along which there are many caves that seem to have been used once as a hiding place for the treasures of pirates.

Where to stay in Elafonissos

In Elafonissos there is only one inhabited center, homonymous to the island and located in the northern tip: it is the port of docking of boats from the mainland and it is here that is concentrated almost all the vacation accommodations.

Until a few years ago the hotel offer of Elafonissos was very simple, made of studios, b&bs and nice pensions but provided with essential services, suitable for tourists with few pretensions.

Today it is wider and more varied, in particular there is a good choice of rooms and studios located near the beaches closest to the center; the most beautiful ones have sea view. The development of tourism has also led to the opening of a couple of hotels suitable for those looking for some extra comfort.

Outside the town of Elafonissos the choices remain very limited… or non-existent. Something can be found in Kato Nissi, a small agglomeration of houses in the western part of the island in correspondence of the homonymous beach.

Little choice of hotels or apartments also near the famous beach of Simos; to these is added only one camping. Because of the scarcity of accommodations, if you want to sleep in this area we recommend you to book well in advance; keep in mind that there are no stores or bars and therefore you will be forced to move always for dinner.

Reaching Elafonissos is a bit complicated because there are no direct flights or ferries. The island can only be reached by a small ferry that departs from Pounta, a town in the southern Peloponnese about 10 km from the city of Neapolis. Ferry runs from Pounta to Elafonissos are very frequent (one every half hour in high season) and the crossing takes only 10 minutes.

The problem is to reach Pounta. The easiest way is to take a plane to Athens and rent a car at the airport; from here you will arrive at the port of Pounta in a little more than 4 hours driving along a stretch of highway for a fee.

In summer there are also some low cost flights to Kalamata, in this case the kilometers to cover by car decrease to 200 and take about three hours.

Getting to Elafonissos by public transport is very complicated because there are many changes of bus that increase the duration of the trip; for this reason we do not recommend it.

The island of Elafonissos is washed by the Aegean Sea, between the southeastern tip of the Peloponnese (to the north) and the island of Kythira or Cerigo (to the south).

See accommodation in this area

Accommodation in Elafonissos
Discover the best Hotels, B&B and Apartments in Elafonissos based on thousands of verified reviews.
Book other travel services